After nearly 14 hours in the air, watching the sun barely set and rise again the next instant, we set foot in Narita Airport. Honestly it wasn’t that different from any other airport we have been in — if, of course, you don’t count the buttocks washing toilets — but after going through customs’ services we were pleasantly bashed with Japanese culture left and right. 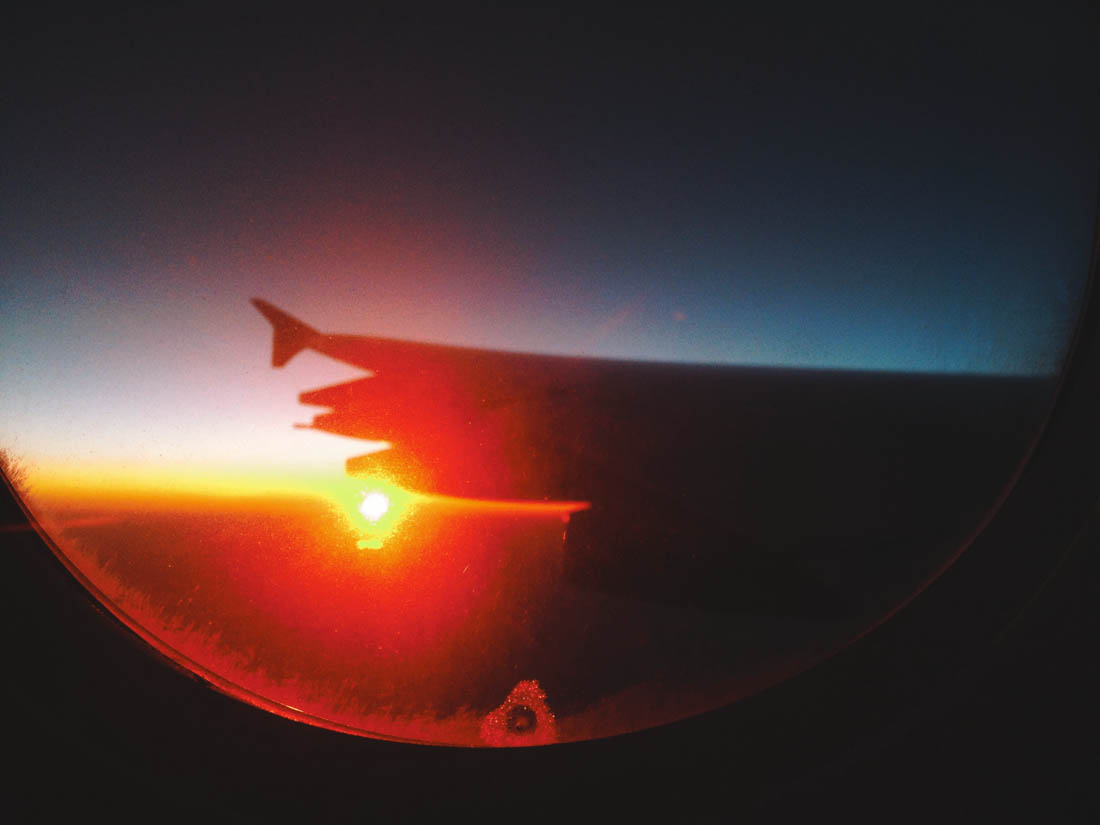 Sunsetting (but not for long) 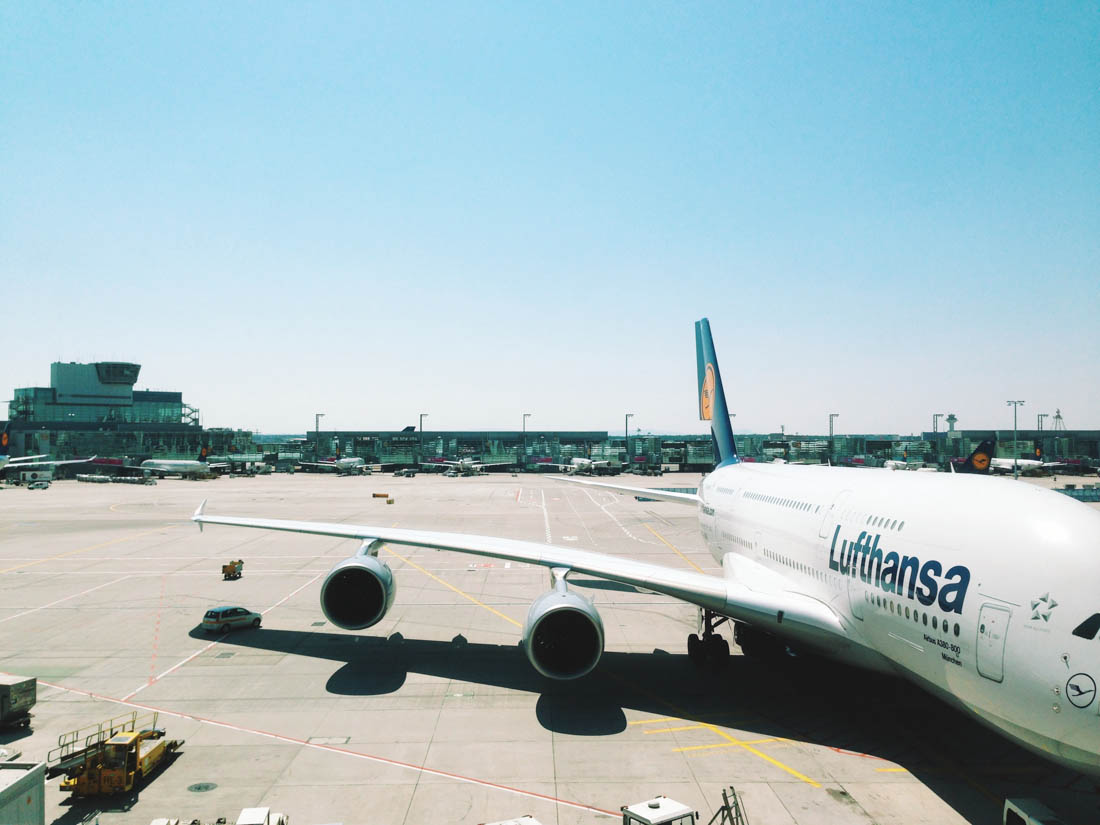 Giant A380 that we flew in to Tokyo — see the car on the plane’s shade? Ridiculous scale 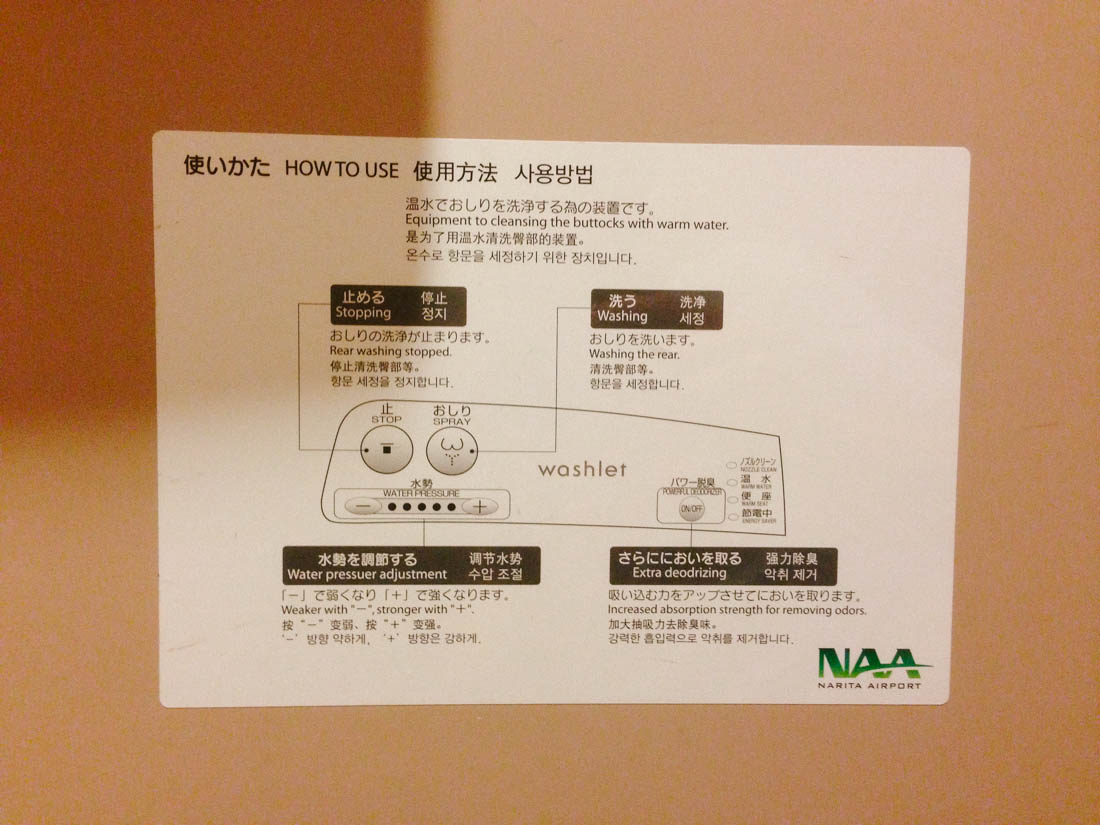 Atypical typos, but the funniest part must be “Equipment to cleansing the buttocks with warm water”

There was no roaming service available on our phones, so the first thing to do was buy a prepaid phone card (¥ 1,000) to call home. Gobs of numbers and microscopical english instructions decipherment later, the calls went through fine and we were all set for the next step: getting mobile phone cards and the JR train passes that were all previously paid for. 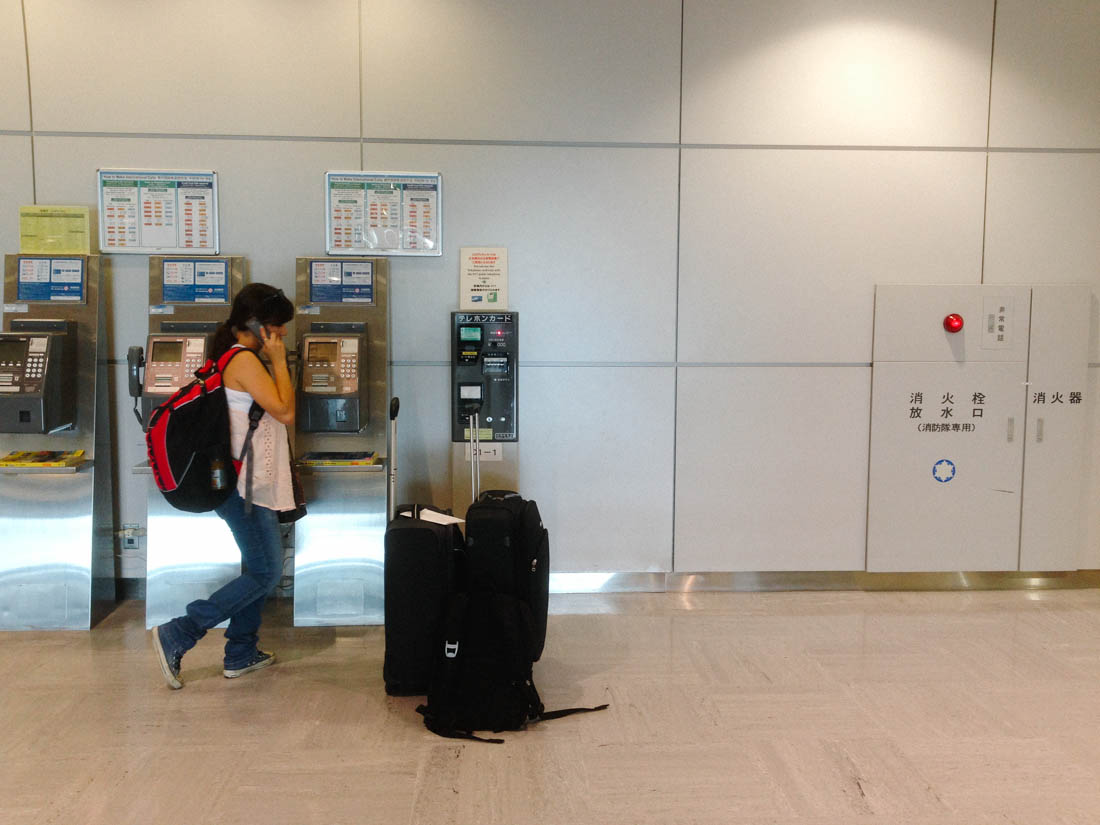 The phone cards needed to be picked up at the airport post office. Ah! — our first real interaction with a Japanese person. “Hello! We bought mobile cards that we need to pick up.”, we said with a nervous smile, showing the receipt at the same time. “Ah, yes!”, said the nice lady behind the counter. She picked our package, confirmed our names with the passport and put a stamp in a logbook that, given its elegance, archaic aesthetic and functionality could have belonged to the Emperor himself. After a “Dou itashimashite.”, said with a huge smile on her face, in reply to our humble “Arigatou gozaimasu!”, we had an incline that, somehow, the language barrier would not be such a big issue. 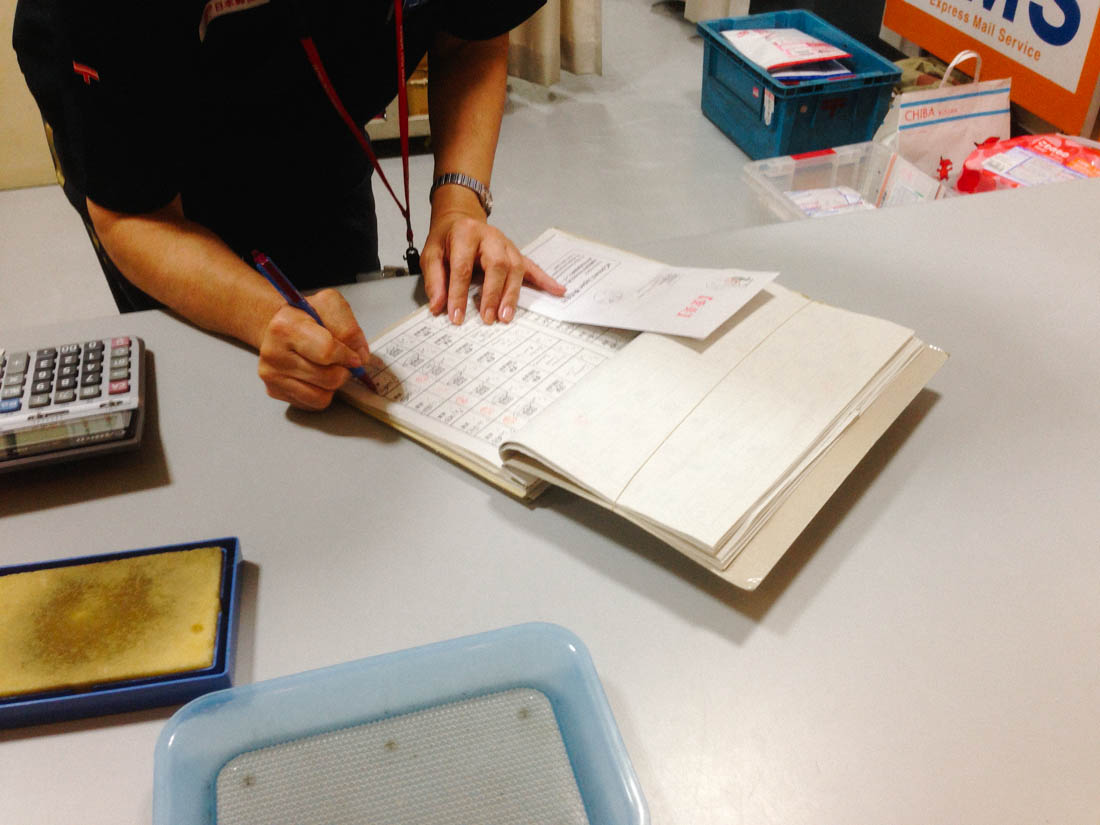 Next, the JR passes. It wasn’t difficult to find the JR office — it was the one store with the huge queue of foreigners. There, we debated whether or not to buy another type of ticket that would give us access to buses, trains and subways. And again a pleasant communication exchange with a smiling and very helpful japanese lady. She made sure we knew what our JR passes were for and when we were supposed to use them: we bought a 14-days pass that we can only use within 14 consecutive days, so it was important to know exactly when we would be starting using them. We also got two Suica tickets and booked our seats on the N’EX to Shibuya. In less then 10 minutes we were riding off Narita and through the green rice fields, on the outskirts of the giant Tokyo. 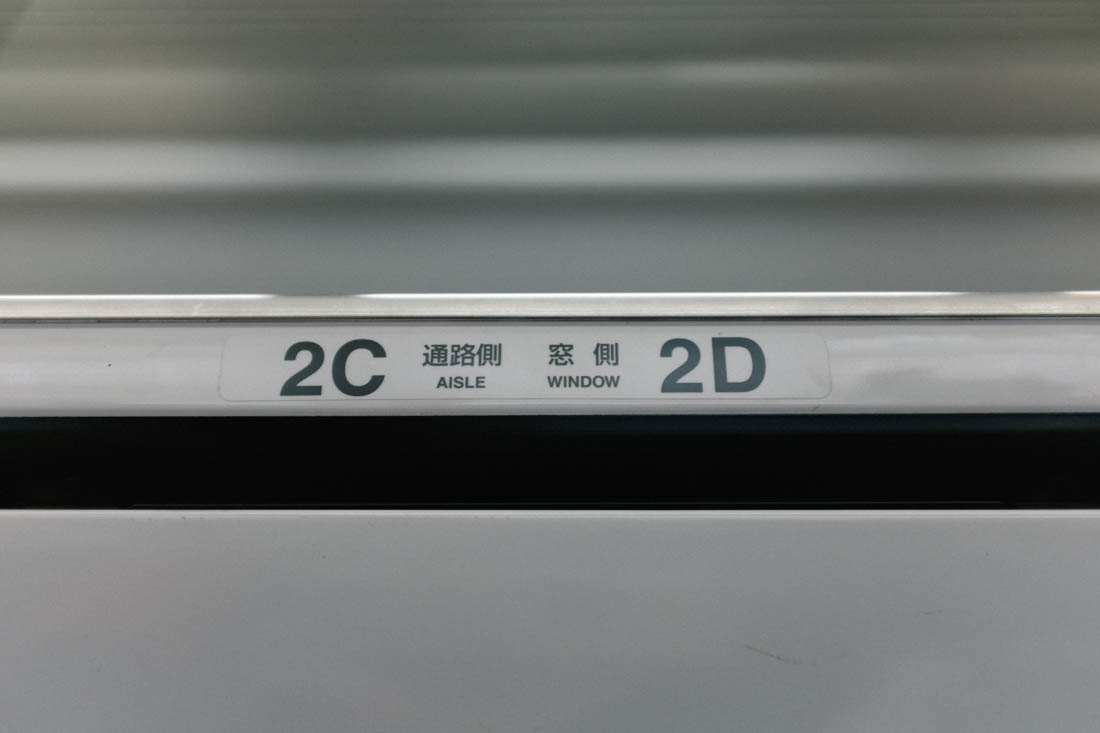 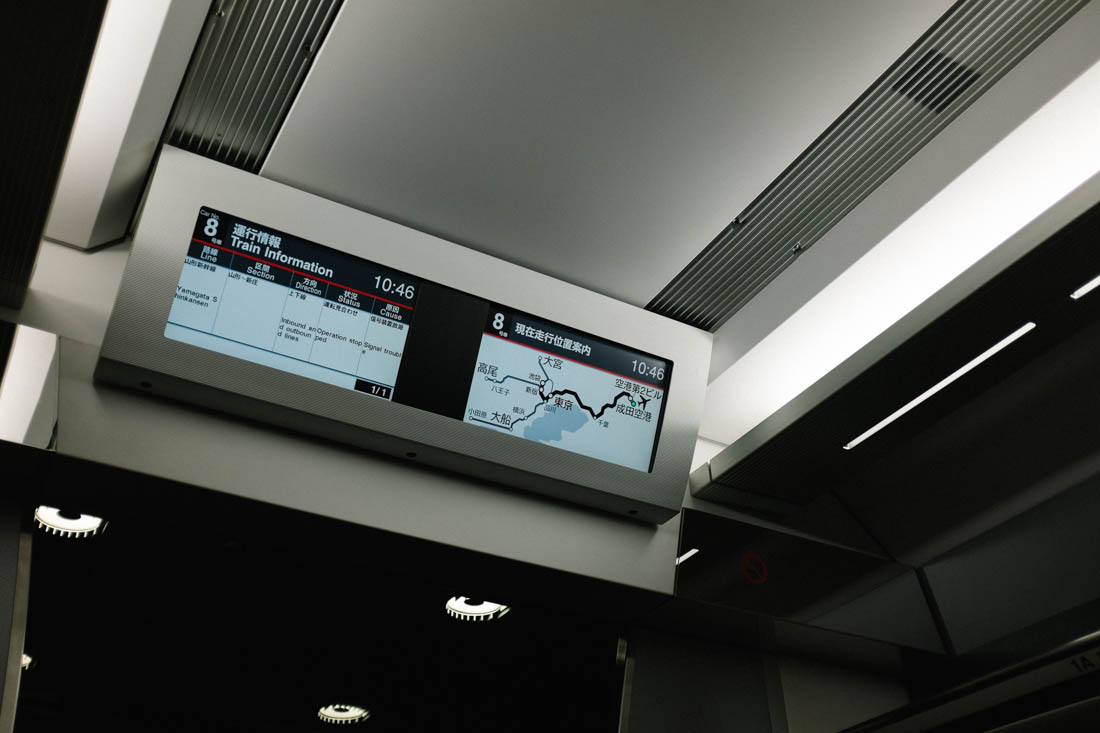 Real-time map of the N’EX trip 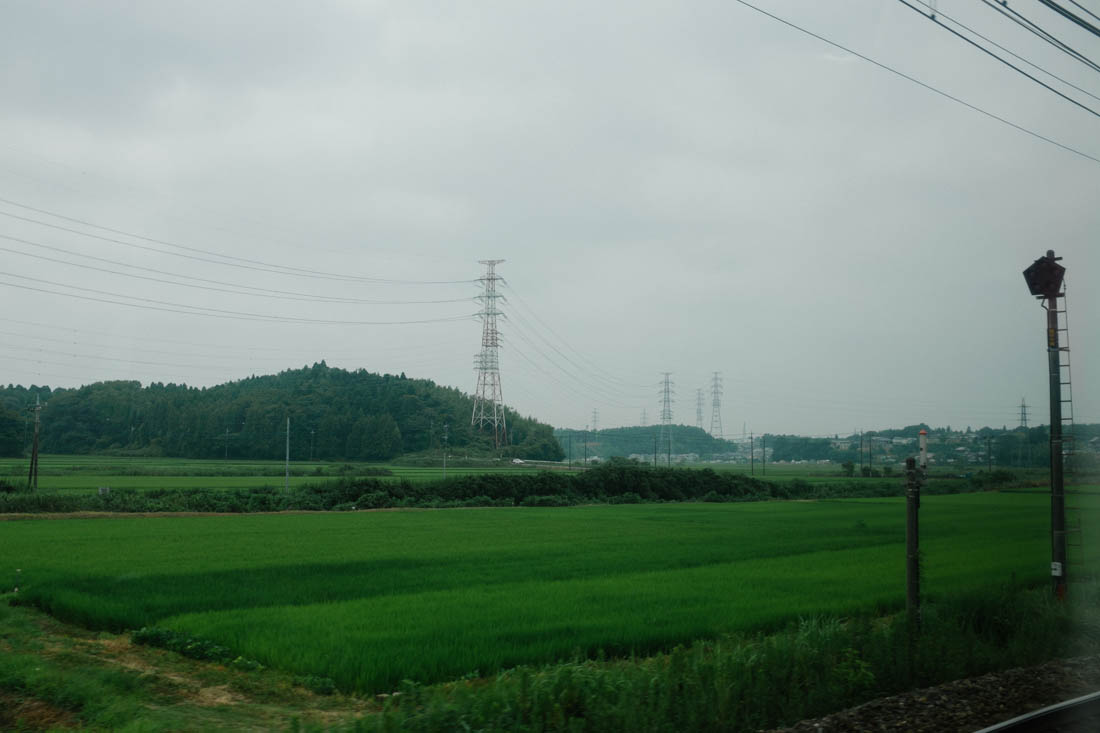 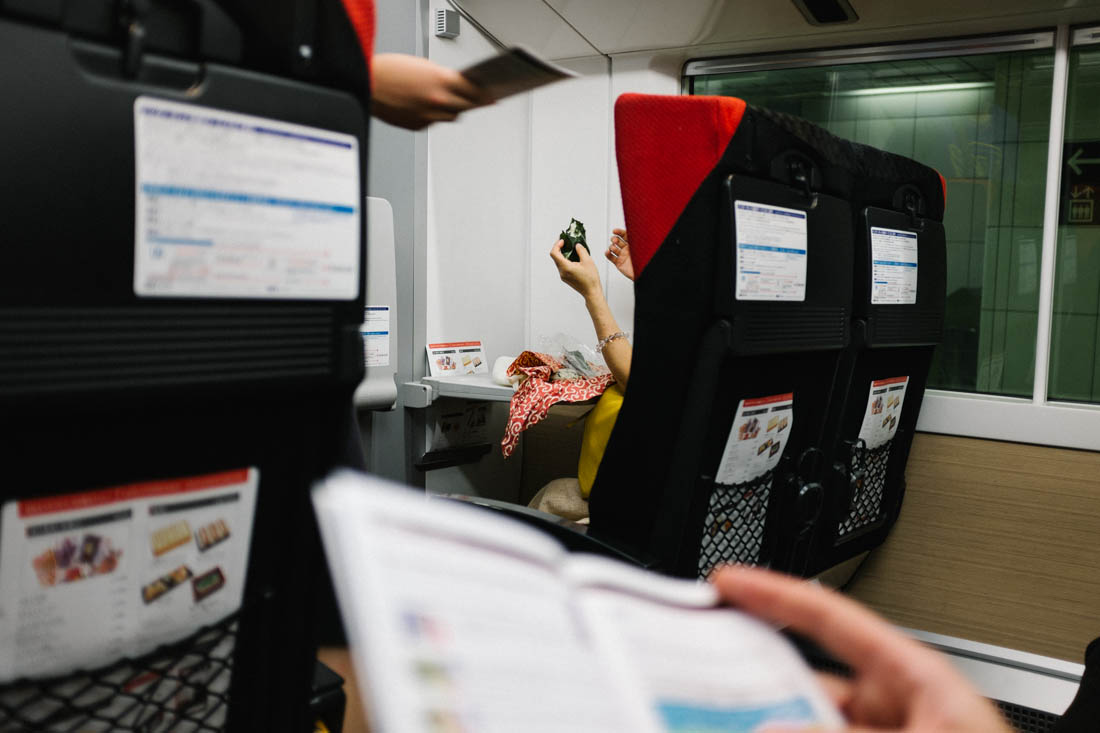 Onigiri DIY on the train

By this time we were starving and, 20 minutes into the ride, a smiling lady pushing a card full of Japanese goodies came by and we were diving in our first real japanese meal: katsu sandwiches and various combinations — all delicious — of onigiri. We enjoyed the rest of our ride comfortably seated in the huge, comfy chairs we wish we had had a few hours earlier on the plane. 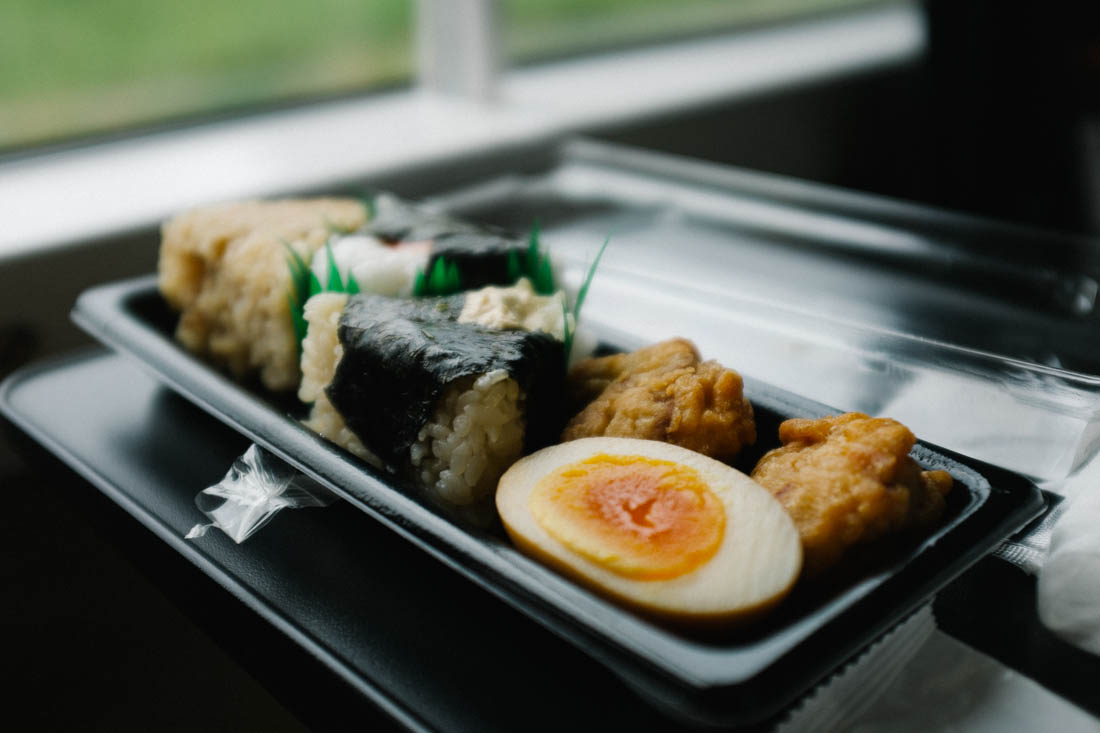 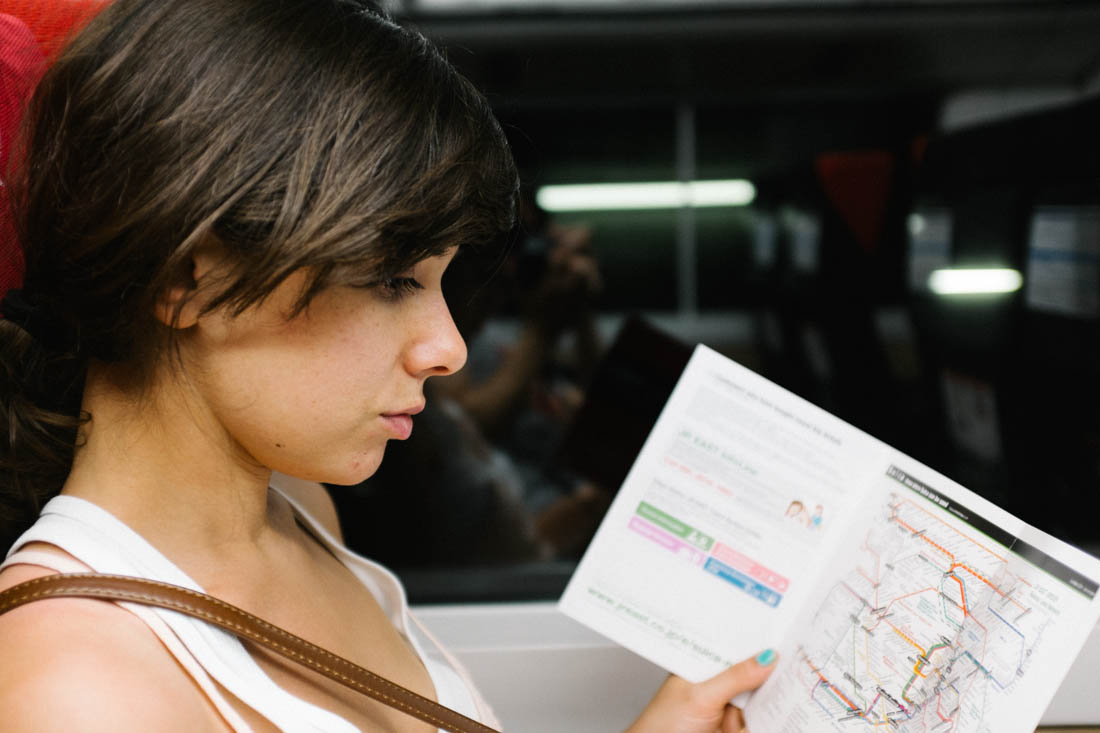 Lena trying to get the hang of the subway lines 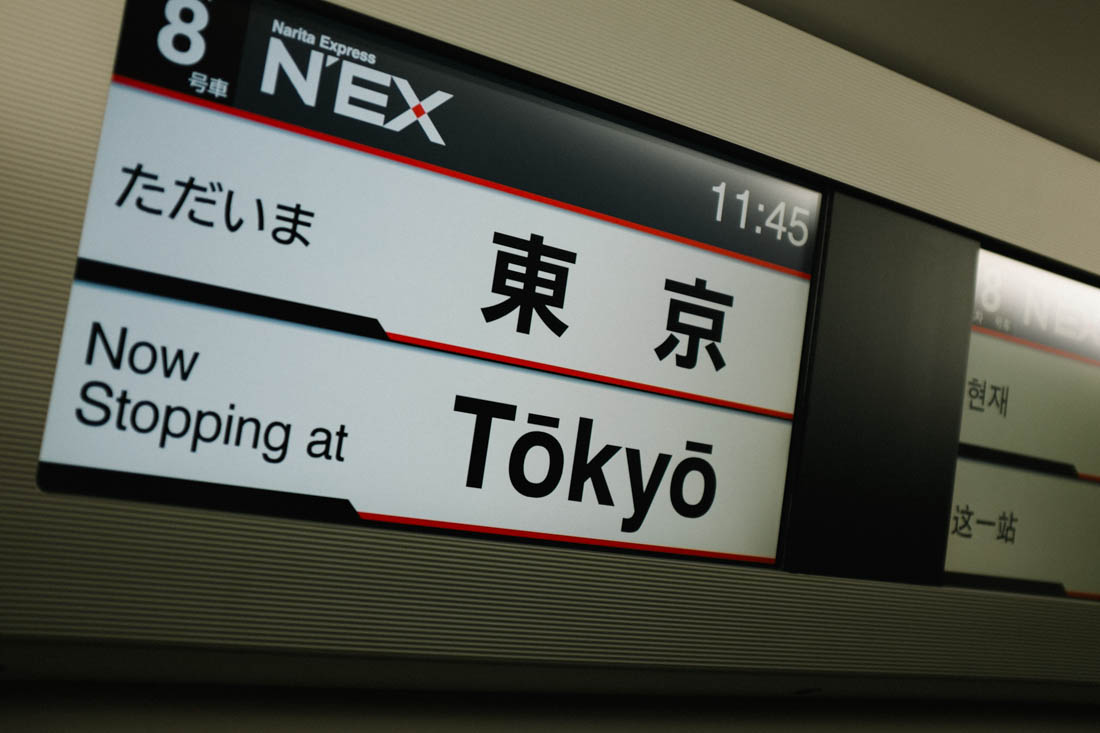 We got out at Shibuya station, where we hoped onto another train on the Yamanote line, leading us to our final destination, Harajuku, where Yumiko’s apartment is located at. 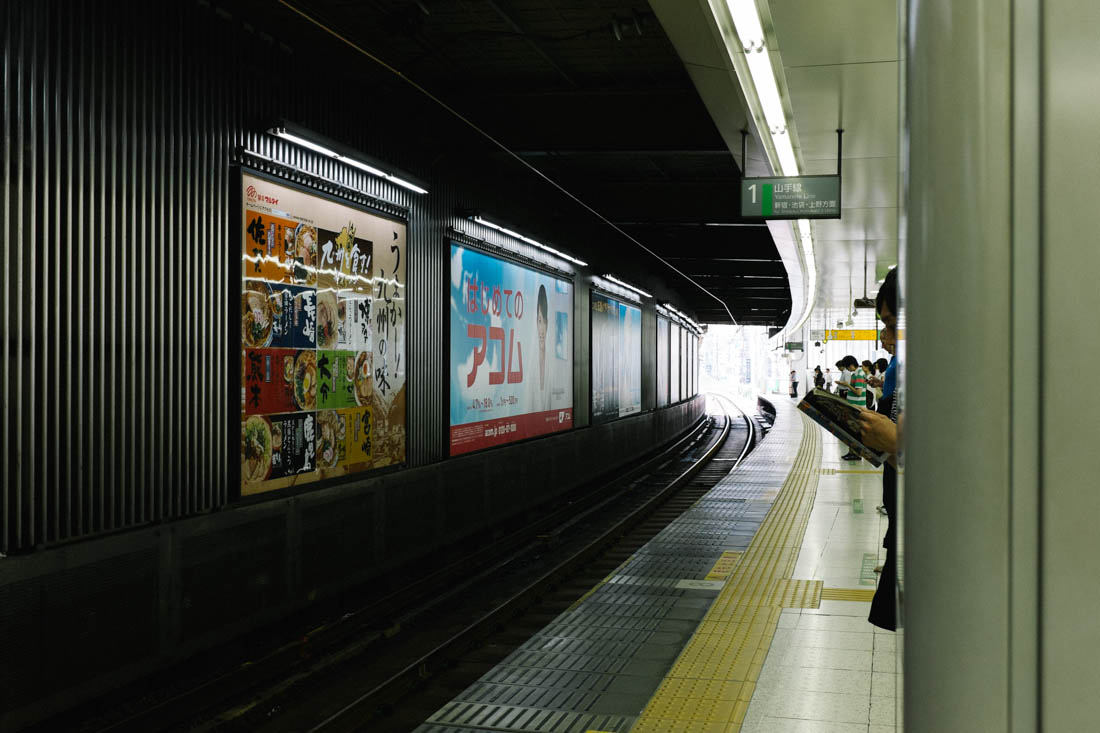 Waiting for the Yamanote line train on the way to Harajuku 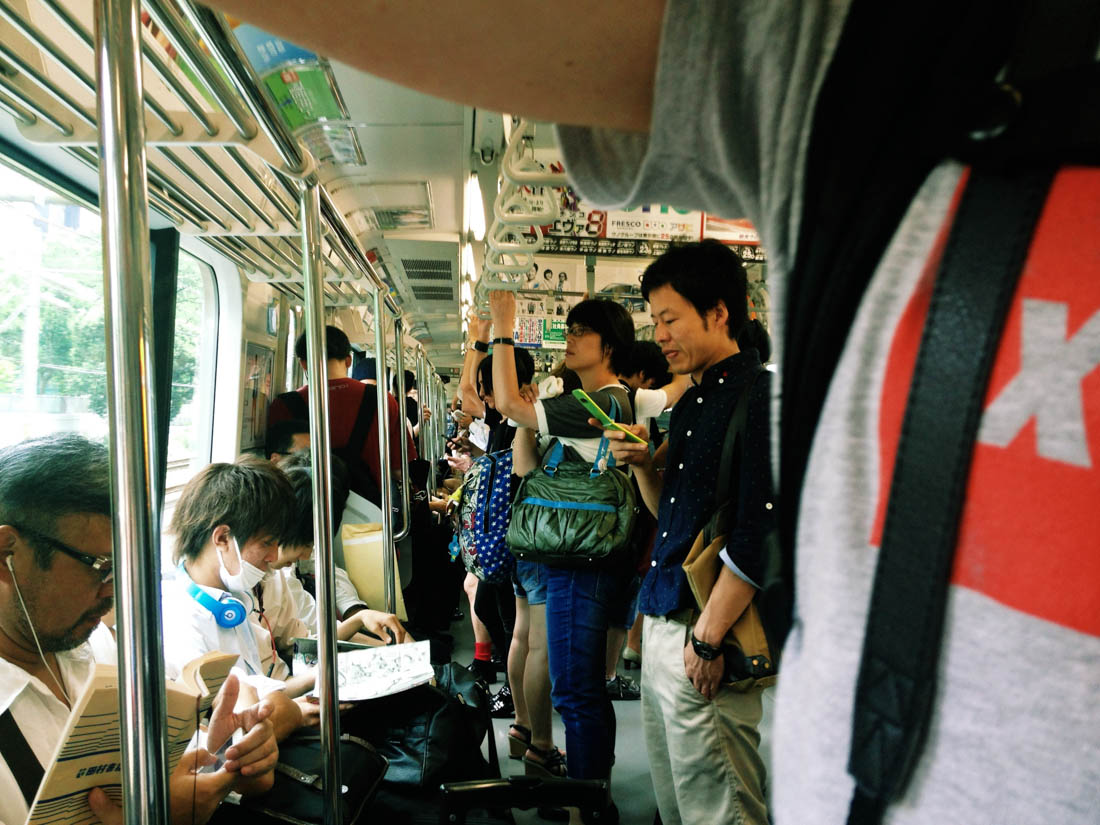 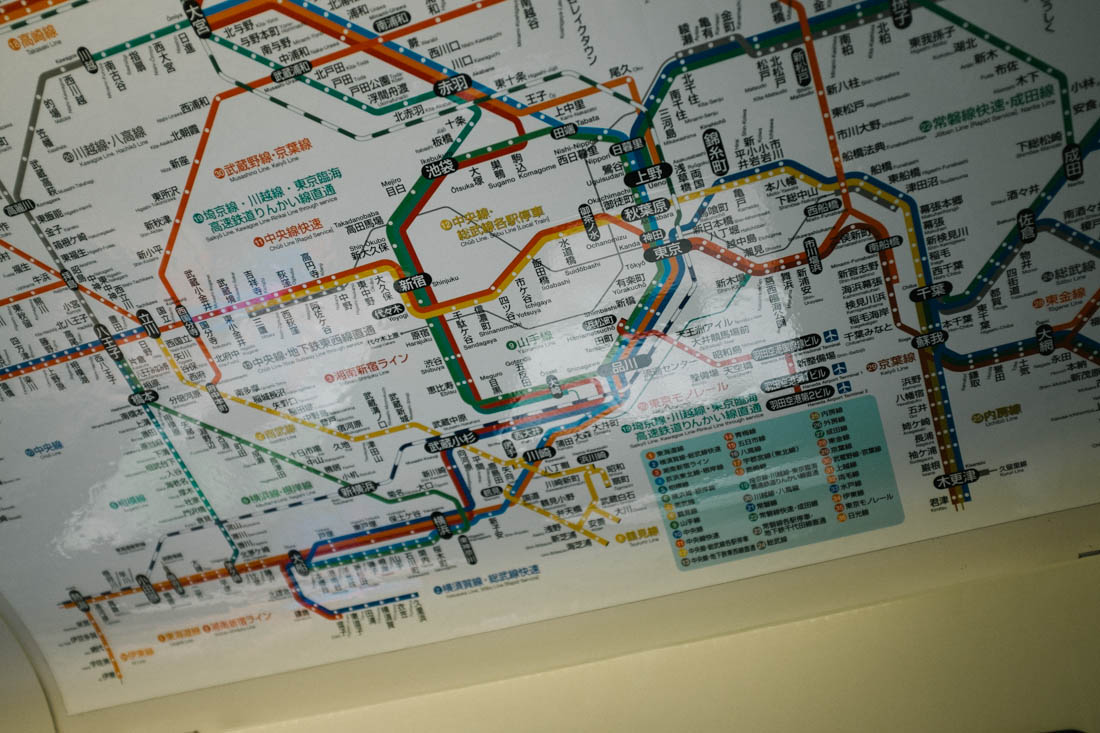 Very dense conglomerate of subway lines and several providers too